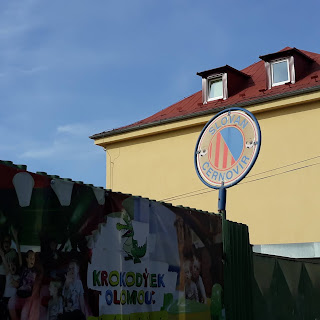 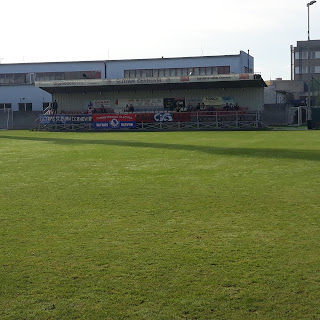 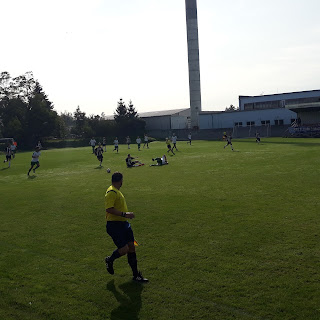 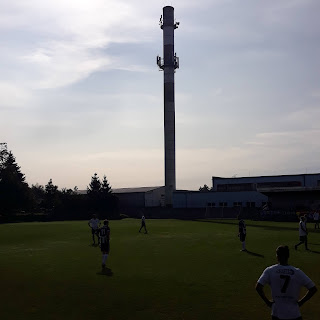 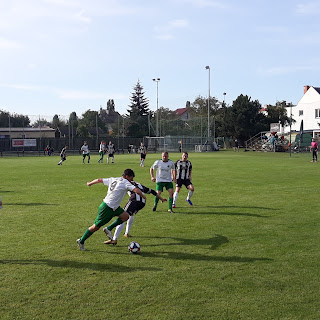 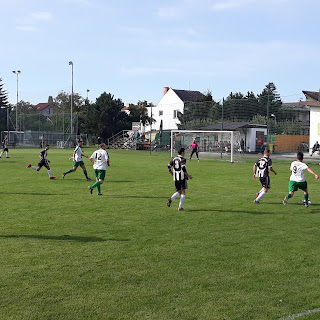 September 20, 2020 - 7th tier
Slovan Černovír 0 Haná Prostějov 1
Attendance - 85
Early on a Sunday morning last month, I made my first trip to Černovír in over 10 years, but my first one supporting Haná Prostějov.  Černovír is a part of Olomouc located in the northern part of the city, and they played last year in the 5th tier.  For various reasons the club had to drop down to the 7th tier.
Černovír plays their usually plays their home matches on Sunday mornings at 10am, which meant an early start for me.  Luckily the train trip to Olomouc is not too long.  I arrived shortly before 9am, and walked about 30-40 minutes along the Morava river to Černovír.  The match was evenly played throughout, with Haná nipping a goal during the last minute of play.
Posted by jay at 2:32 PM No comments: 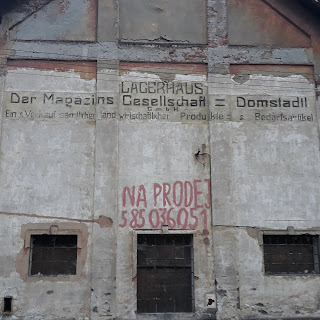 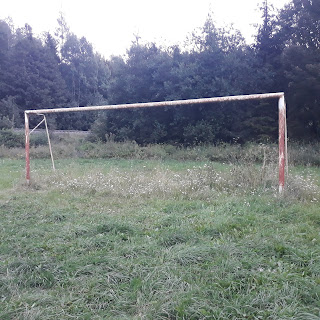 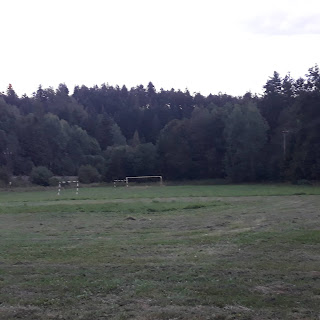 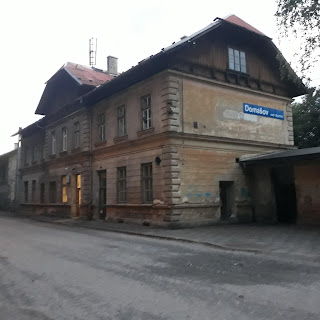 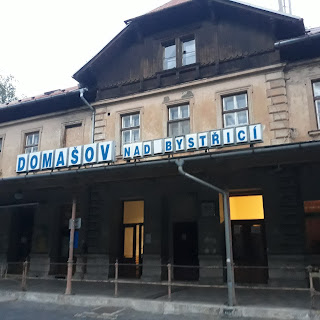 A few weeks ago I had a brief stop in Domašov nad Bystřicí (Olomouc District), a small village of 490.  Before WWII, the villlage was heavily influenced by German speakers.  On one of the buildings near the train station it is still possible to see one of the old German advertisments.  The local football team last played in 1994/95 when they were in the 9th tier.  During that season, they finished in last place.  Sadly, the only thing remaining from the club is one rusted goal post.
Posted by jay at 1:23 AM No comments: 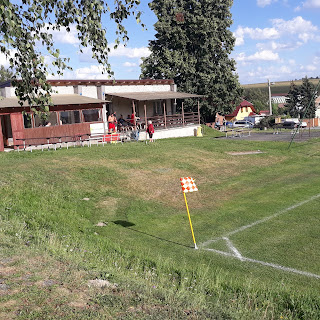 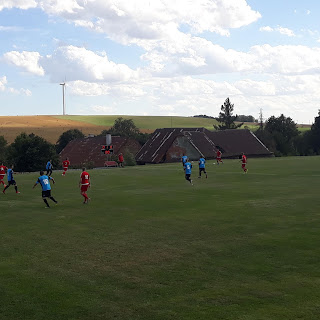 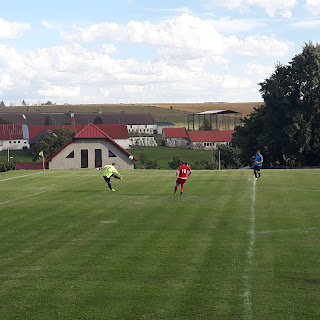 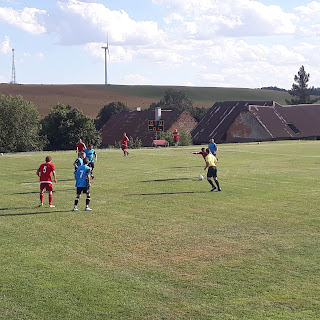 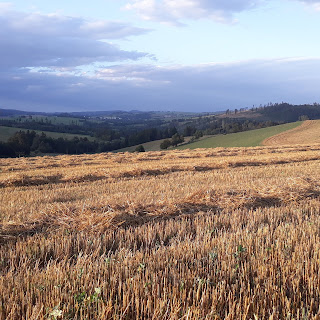 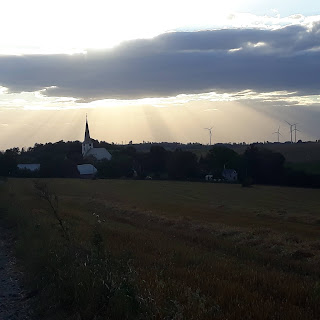 Almost two months ago I travelled for Hraničné Petrovice for a weekday cup match.  The village has a population of only 150 and sits at an elevation of 587m above sea level.  The village does not have much except for the football pitch, a church and a few homes.  To get there I had to take a train from Prostějov to Olomouc and finally to Domašov nad Bystřicí.  From there I had to walk around 3-4km, becauses buses to Hraničné Petrovice are few and far between.

The pitch was had a simple set up, with only a few benches.  It was slightly elevated over the rest of the village.  As for the match, the visitors deserved the win, but with a few more bounces the hosts could have found themselves progressing to the final.  This competition serves as regional qualifiers for the 2021/22 Czech Cup. 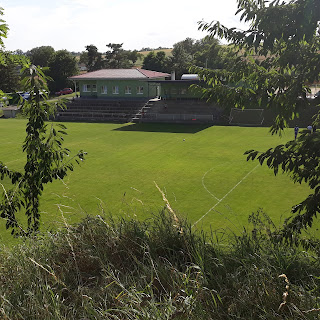 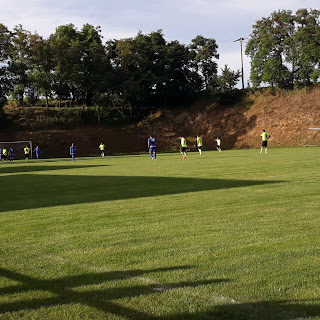 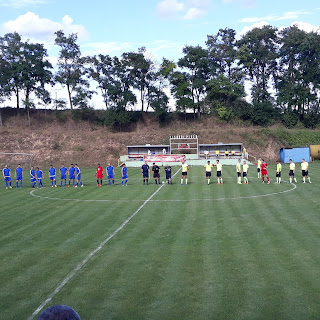 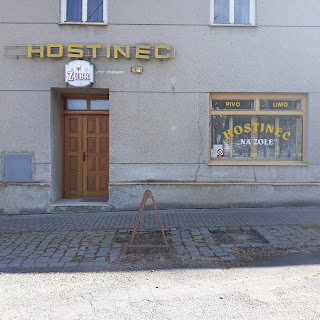 I have lost track how many times that I have been to Pivín for football over the years, but probably close to 10 times.  Pivín is a village of 730 located about 15km south of Prostějov.  I usually go to matches here a few times a year because it is easy to reach on a bike.  The local football club is called the 'Turks' and their goalie even had the Turkish flag on his jersey.  According to local legend, the name comes about when the Turkish army was here hundreds on years ago.  Apparently, they camped in the current day location of Pivín and stayed for a number of years.  Some of them might have even stayed longer, who knows? 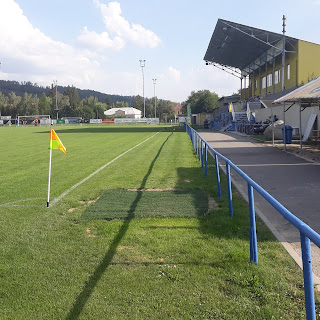 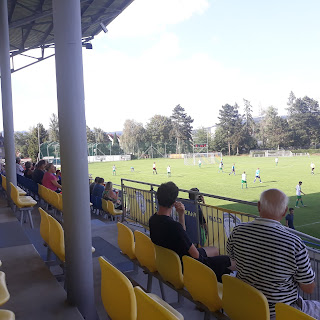 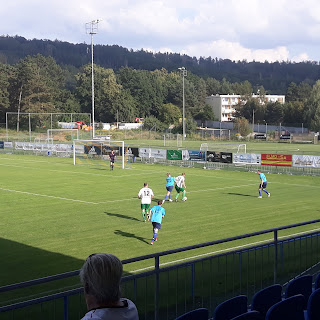 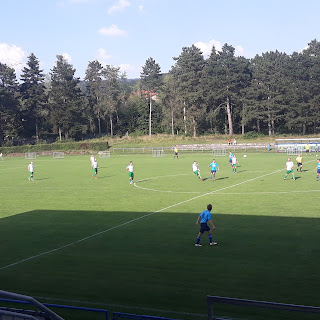 August 16, 2020 - Olomoucký kraj - 7th tier
Šternberk B 2 Haná Prostějov 1 (4-1 on penalties)
Attendance - 80
Šternberk is a town of 13,500 located north of Olomouc.  The local football club was established in 1945 as SK Šternberk.  From 1963-65 the club spent two seasons at the 3rd tier of football in the country, which has to be considered the greatest success for the club.  Ivo Viktor, who won the Euro 1976 with Czechoslovakia played with Šternberk from the age of 14-18 before moving on to Železárny Prostějov.
The stadium has a nice set up, which is a little unusual for lower tier football in this country.  They have a large covered stand, which was renovated a few years ago.
As for the match, it was not really well played by either sides.  Both teams scored from the penalty spot during regulation play.
Posted by jay at 6:10 AM No comments: